I acquired my first Giant Schnauzer in 2008, Ch. Shelton Fandango APT, fondly known as Bazil. He was actively campaigned in 2009, winning BJIS, BPIS, RBPIS, multiple puppy groups, and Reserve Working and Herding Puppy of the Year. His temperament, and ease of care, sold me on the breed.

My new found love for Giant Schnauzers inevitably made me decide to produce my own top quality showdogs. Looking locally, there were no breeders producing top quality show or working dogs. Furthermore, the toplines of the local dogs were weak, and the coats were dull and soft. The only way to make progress was to import from a top kennel, so I contacted Gently Born in Russia. Zasha arrived in January 2010, the result of a productive journey to Moscow in 2009.

Martinique has been involved in show dogs her entire life, with her grandparents starting off Starvalley Bullmastiffs in 1964. Martinique excelled at Junior Handling, handling many different breeds. She eventually took over Starvalley, but is no longer involved in the breeding of Bullmastiffs.

We live on a smallholding of 5 acres, with a variety of farm animals, as well as our dogs and cats. We take the utmost care to socialise our puppies with as many friends and their children as possible. Puppies are exposed to horses, pigs, chickens and geese. A well socialised puppy is always a better adult dog, and producing steady temperaments is our number one priority.

Our thanks must go to the folks who assisted us in getting to where we are in dogs. Rob Forsythe, Chris & Gill Griffith, Brian and Sharon Blades, Eugene Yerusalimsky, Anna Vlasova, Bernd & Heidi Russow, Giovanni Bonfacio and Hrvoje Crnoja. 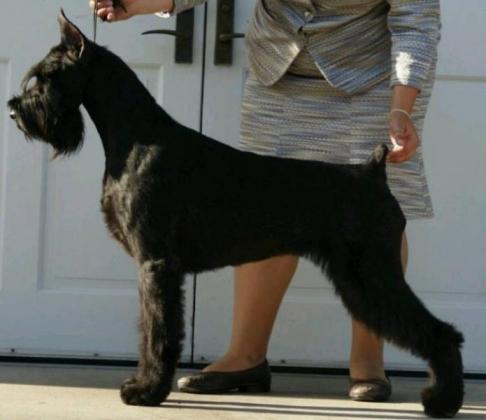 The Giant Schnauzer is a large, powerful, compact dog. It looks like a larger version of the Standard Schnauzer. The dogs height is the same as the length, giving it a square look. The head is strong and rectangular in appearance. The muzzle is the same length as the top of the head.

Whether it is your dog, cat, bird, rabbit or most other exotic pets, we will treat it as "one of your children".

We offer a full veterinary service at our hospital. This includes medicine, surgery, dentistry, micro-chipping, exotic animal care and limited grooming and boarding services for your pet.