The Boerboel developed, from 1652 up to about 1900, in a hard school by tough farmers in South Africa, who were threatened by every kind of dangerous predator, in testing terrain and a challenging climate. Hard-pressed pioneer farmers, however resourceful, didn't have the circumstances which exactly encouraged the conservation of rare breeds of dog. They had a need for brave powerful virile dogs and breed good dog to good dog untill they obtained the desired result. Performance directed every breeding program. Pure-breeding, handsomeness and a respect for heritage doesn't usually feature highly in a pioneer hunter-farmer's priorities.

It should be a matter of pride that the Boerboel was developed from the best mastiff-type dogs available in South Africa and brought here by soldiers, colonists and settlers from Europe as well as migrating African tribes. It is a breed to be proud of for this reason alone. As a registered, pure-bred, recognised breed of dog, the Boerboel will need a well-worded breed stan 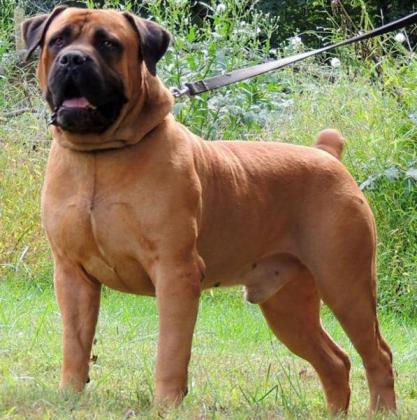 The South African Boerboel is famous in its native country for being protective without displaying any aggressiveness. Most of the time, it is a gentle and affectionate companion that prefers to stay.

We pride ourselves on excellent customer service and client communication. Hakuna Matata Veterinary Clinic was a finalist at the Cape Talk Radio 2013 Small Business Awards.